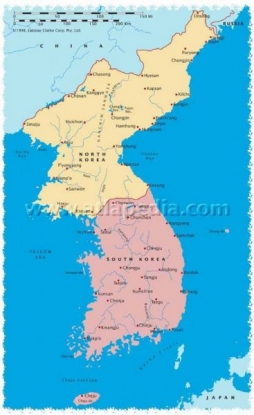 Aberdeen Voice presents the last of three articles by Jonathan Russell  of Aberdeen and District Campaign for Nuclear Disarmament (CND) investigating the nuclear and military build-up and tensions in Korea and the wider Asia Pacific area.

Possibly the single most important and worrying decision of Obama’s first presidential term was to move 60% of US naval assets plus other military personnel to the Asia Pacific area by 2020.
Obviously linked to shifts in military resources from Europe, Iraq and Afghanistan, this development is the principal reason bilateral relations between the US and China are at their lowest point since Obama came to power.

That said, the possibilities following the re-election of Obama are certainly preferable to what may have unfolded under Romney. The latter’s insistence on naming China as a currency manipulator might well have increased tensions between the two countries.

One key issue is that, while the US has huge debts and could face economic meltdown, its military might continues to dominate the world. We now face a scenario where, on one hand, US allies in Asia Pacific have huge military budgets while, on the other, China is now the second biggest global military spender. This is a situation as unsustainable as it is absurd.

One US think tank suggests that as US debt equals its military spending, the way to reduce the deficit is to withdraw from its international military role.

While huge sums are spent on the military, international aid has fallen rapidly to $114 billion, much of this awarded to recession-hit western countries or used to boost western sales in the third world. Unfortunately, much aid is wasted funding large-scale corruption and high consultancy bills.

US defence department study The US force posture strategy in the Asia Pacific was presented to Congress in July. Co-author Michael J Green explained:

“An underlying weakness in the strategy is that it focuses on the US military in Asia in isolation from diplomacy, trade policy and other non-military elements of government that are just as important in maintaining influence in the region. The defence establishment meanwhile continues to see US/China issues in binary terms as it did during the cold war against the Soviets.” 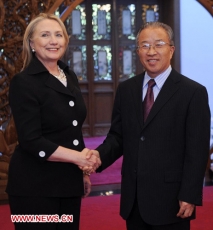 Concerns across Asia about the US military shift in the region were further fuelled by the US launching an air-sea battle exercise focused on fighting emerging powers. Green warned against overestimating China’s military despite its rapid growth, pointing to China’s huge vulnerability due to its dependence on sea lines.

China is now questioning the sincerity of the US role in stabilising Asia. Given their strong security ties to the US, China regards Japan, South Korea and the Philippines as US proxies and is consequently investing considerably more of its resources into military spending, at the same time reaching out to the US through diplomatic channels.

Following a meeting between a US deputation including Hilary Clinton and China (as reported on September 12) Councillor Doi Binggu stated:

“Major powers like China and the US should focus their Asia Pacific policies and interactions on regional peace, development and cooperation. China and the US cannot tread an old path of conflict and confrontation.”

The Chinese do not have a history of invasion outside what they see as China. The US has considerable form in such matters. The emerging country also faces internal conflicts which, added to the massive task of sustaining its own population and dealing with rising inequality and an ageing population, leaves it with little energy to take on the US militarily. Despite this, China’s military continues to grow, largely in response to US military policy.

A recent power struggle has taken place in China. An open letter from a group of leftists asked parliament not to expel disgraced leader Bo Xilia, protesting such a move would be politically motivated. Particularly popular with the poor, Bo Xilia’s demands for social reform were seen as a threat to the current leadership.

Meanwhile, both countries are meant to be making cuts in their military budgets, the US to the tune of $400 billion

In my last report, I spoke of the Juju island situation in South Korea, where the US wants to build a naval base against strong local opposition.

Japan has a similar conflict on Okinawa, an island annexed in the 19th century that looks across to both China and the Korean peninsula.

The island houses two-thirds of the US army in Japan (currently 26,000 troops), and is the centre of opposition to having Osprey aircraft based in the area.

Ospreys, which take off and land like helicopters but fly like fixed wing aircraft, could be used to attack the Chinese mainland and North Korea. It is reported 80-90% of the local population opposes basing them in Okinawa and a protest involving some 100,000 took place recently. A number of older protestors maintain a constant vigil outside the US base.

Despite Australia’s economic reliance on China, it has also increased its military alliance with the US with a doubling of US troops, primarily in the Darwin area. Meanwhile, both countries are meant to be making cuts in their military budgets, the US to the tune of $400 billion. Policies and budgets are clearly not fitting.

There have been reports of conflicts between China and Japan following the landing on the disputed Diayutai/Senkaku islands of 14 activists from Beijing. The islands, Chinese prior to WWII but now Japanese, are being used as a US military base. This initial incursion was followed by 150 Japanese activists landing on Diayutai/Senkaku, leading to nationalist demonstrations in both China and Japan.

These demonstrations have arguably helped both governments: in Japan, by deflecting concern from the Okinawa situation and boosting the popularity of a right wing government; in China, by distracting public concern about Bo Xilia and bolstering a government still to the right politically despite increasing concerns about corruption and inequality.

Japan and the US are presently undertaking joint military operations with 10,000 US and 37,400 Japanese troops. This again creates tension and will certainly lead to increased military spending by China. The Chinese are monitoring the situation but accuse Japan of manufacturing tensions. This may also be related to Obama’s successful presidential campaign in showing he can be tough on foreign policy, particularly on China.

On a positive note, Japan and North Korea met in August, their first meeting in four years and the first ever between their respective leaders. 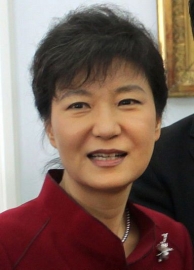 Elections will take place in South Korea on December 19. For the Saenuri party Park Guen-hye is standing, the daughter of previous president Park Chung-hye.

Initially, her only rival was former human rights lawyer Moon-Jae-in of the liberal left Democratic United Party, but a new contender is Ahn Cheol-so, founder of the country’s biggest antivirus software company. One factor that may yet play a part in the region’s future is the historic hatred that exists between North Korea and the Saenuri party to this day.

In a further development, Moe-Jae-in and Ahn Cheol–so formed an electoral pact to beat Park Guen-hye but as we go to press have yet to decide who will lead (they hold similar positions on increasing welfare, and on North Korea favour dialogue and economic co-operation). In response, Park Geun-hye has said she wants to meet the North’s Kim Jong-un in a bid to improve relations.

Another development in South Korea is that two nuclear reactors have been closed temporarily.

The South Korean economy has ridden the recession in similar fashion to Brazil by moving to Green technology.

It is difficult to judge what control China has over North Korea. Information leaked to Wikileaks suggests there is often tension between the two and at the UN, China has condemned the latter’s nuclear weapon trials. China remains North Korea’s main ally, however.

North Korea has been badly affected by floods this year, leading to increased aid from China. Agricultural reforms similar to those in Cuba have taken place and following shortages of artificial fertiliser and pesticides, they are increasingly moving towards organic farming.

The state has supported training and research in this area and has developed organic fertilisers suitable to its cold climate. Farmers are now allowed to keep 30% of produce to sell in markets; the rest goes to the state.

Following its own agricultural crises linked to the long-term damaging effects of industrial farming, South Korea has been developing organic farming since 1993.

There are problems politically and culturally in both North and South Korea. A united Korea should be the long term aim, with a government hopefully informed by the mistakes of the past and foreign influence kept to a minimum.

Military posturing on all sides serves only to worsen the situation. Short-term internal needs must be replaced by a longer term vision for Asia Pacific. Diplomacy should take centre stage and agreements must be reached by all sides to reduce their military, reducing tension and leading to better relations all round. Reducing military spending will then allow countries to foster alternative use of resources and improve the lot of ordinary people.

On a broader front, the people of the world need to start protesting NOW against the crazy military machine that controls, kills and robs us of our humanity. We need real statesmen like South Korea’s former president Kim Dae-Jung and current world leaders could do worse than follow this great man’s example.