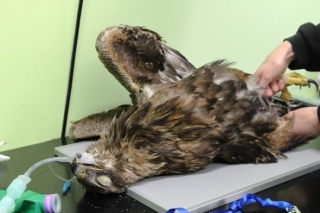 With thanks to Raptor Persecution Scotland.

A golden eagle was found shot and critically injured on a Scottish grouse moor in Dumfries & Galloway on Saturday, 6th October.  The bird, which had suffered shotgun injuries, is receiving expert veterinary care at the SSPCA’s National Wildlife Rescue Centre.

“Information from local sources indicates that the bird was discovered on the Buccleuch Estate, very close to the boundary with Leadhills Estate, just to the north of Wanlockhead (see map below – our thanks to Andy Wightman at www.andywightman.com for his help defining the estate boundaries: Buccleuch pink, Leadhills grey). 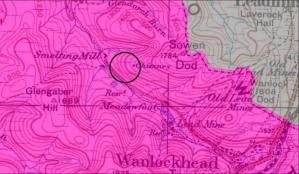 “It is not known where the actual shooting took place.  How far can an eagle fly with an injured wing and injured tail muscles?

“When it was found it reportedly had extensive feather damage, suggesting it had been stumbling around on the ground for some time.  The SSPCA has said if it hadn’t been picked up on Saturday it is quite likely that it would have starved to death.

“The area where the eagle was found is managed as driven grouse moor, as is the land immediately on the other side of the border and while it’s been reported that Leadhills Sporting Ltd leases land on Buccleuch Estate (see here) the precise area leased is not known.

“Whoever did it, whether a gamekeeper, a member of a grouse shooting party or someone from the Wanlockhead silk embroidery club, they will escape justice.  That’s a certainty!  Along with all the other people who have poisoned, trapped or shot the 26 other dead or ‘missing’ eagles over the last six years (see here).  And these are just the ones we know about.

“Is this bird going to be the one that finally galvinises a strong response from the Scottish Government?

“It’s been 20 years since the RSPB first started drawing attention to the criminal and unsustainable activities taking place on driven moors. What’s changed in those 20 years?  NOTHING!  (Except we’re now much better informed about the extent of the issue….all those claims of “it’s just a rogue keeper” just don’t wash anymore.  We know better now!)

“It’s encouraging to see that Scottish Environment Minister, Paul Wheelhouse MSP, has already made a statement (see the SSPCA press release).  Now we need more from him and his government.

“The game-shooting community continues to show utter contempt for the wildlife laws, despite all the chances they’ve been given.  Enough is enough! Estate licensing should now be on the cards.  No more excuses, just get on with it. Those who don’t persecute raptors have nothing to fear.

“Please email Paul Wheelhouse at ministerforenvironment@scotland.gsi.gov.uk and urge him to make a strong response.

“You might also want to mention to him how impressive the SSPCA response has been to this crime.  Eagle found on Saturday, press release out on Tuesday.  Mr Wheelhouse should soon be commissioning a consultation on increasing the SSPCA’s powers to investigate wildlife crime; let him know how effective they are.”

The latest comments from the Government can be found at:
http://raptorpersecutionscotlandresponse-to-dead-eagle-found-in-grampian/