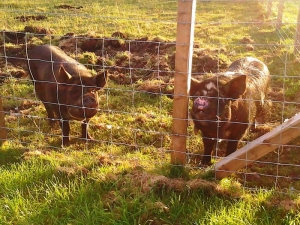 The Scottish Government is currently running a public consultation on the implementation in Scotland of EU Regulation 1099/2099 which governs the welfare of animals at the time of slaughter.

These regulations could do many things to reduce the pain and suffering caused to animals killed in abattoirs.

The Scottish Government currently has the opportunity to ensure that all animals slaughtered in Scottish slaughterhouses are rendered totally unconscious prior to being killed.

However, at least one senior civil servant and a Government Minister has said the consultation process will not result in a ban on the slaughter of conscious animals. Politicians and civil servants should not be allowed to take democracy out of our hands.

We must show the people whose wages we pay at the Holyrood Parliament that the majority of the electorate want all animals to be rendered fully unconscious before being killed. No matter what you hear from politicians, be assured that these regulations could be used to totally ban the non-sentient slaughter of animals in Scottish slaughterhouses.

At a meeting held in Edinburgh on 4 April, a senior civil servant admitted Government Minister Richard Lochhead had already decided, before the consultation documents had even been drafted, that compulsory CCTV would not be included for consideration in the consultation. I denounced this as an affront to democracy and pledged to mount a public campaign to have CCTV included in the consultation.

After a series of e-mails between ACAL the Government, I was informed that the use of CCTV would now be included in the consultation. When the consultation was published, a question about CCTV was included but phrased in such a way to make it clear this would be something for future implementation and not something to be brought in now.

Once again, this is a case of our employees at the Parliament telling us what they want to do instead of waiting until the electorate tell them what we want them to do. These regulations could be used now to make it compulsory for abattoirs to install CCTV to monitor the welfare of animals from the moment they arrive at the abattoir to the time they are killed.

There are two things I would like our Scottish supporters (and any of your friends in Scotland if they are so minded) to do.

1: Please go to the Scotland for Animals website, fill in your details as indicated and make your submission to the Consultation. http://www.scotlandforanimals.org/consultation.html

2: Please write to your constituency and list MSPs via this website: http://www.writetothem.com/
A sample letter for guidance can be found here