‘What lies beneath?’ is a question which should be asked about Union Terrace Gardens, not least by those who wish to build underground structures there.  Aside from the roots of 250-year-old trees and rich soil which helps prevent city centre flooding, we have the now underground Den Burn.  Jake Williams shares his thoughts. 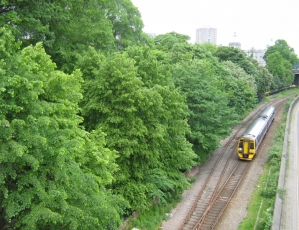 The stairs of Rosemount Library in Aberdeen used to be lined with framed pictures, either photos or line drawings, of Aberdeen from bygone times.
The one that I remember was from sometime in the 1800s, showing Union Terrace Gardens before Union Terrace Gardens was there. It was a view looking north from the Union Street bridge, but there was no park, no theatre and no railway line.

Three decades later, the accuracy of my recollection isn’t guaranteed, but I remember looking at a row of cottages on the right where Belmont Street is now, and another row on the left where Union Terrace is now.

The houses all had long thin gardens with drying greens right down to the Den Burn, which flowed straight down the middle of the picture, and there was a hump-backed bridge and a few wee wooden bridges over the burn. Union Bridge was opened in 1805, and the railway was built about 1867, so the picture must have been drawn between these dates. The gardens were laid out about 1879 [I got the dates from Wikipedia].

The name of the Den Burn is perpetuated by the street and the health centre named after it, but the existence of the burn itself is nearly forgotten, having been underground for most of its length for the last 150 years.

It starts somewhere near Westhill, passes Woodend Hospital, and I believe it still runs through the back gardens of the big houses in Rubislaw Den. Near Queen’s Cross it is in a deep stone-lined channel, visible from some of the streets and lanes around Osborne Place.

One summer about 1980, during a dry spell when there wasn’t much water in the burn, my pal Chris and I went an adventure. We scrambled down into the wee canyon where the burn ran along the side of the Grampian TV studio at  Queen’s Cross and walked downstream in our wellies.

Soon the burn went  underground and we carried on with torches. It was like the films where the heroes are journeying through a city’s Victorian sewers: a tunnel of red bricks arching over our heads, with enough headroom to walk upright.

Here and there were ladders going up to a heavy steel manhole cover, and we could keek through the keyhole and try to work out where we were, from a limited view of the upper part of some building. We weren’t tempted to try and push up the cover, as we were probably in the middle of the road.

We must have crossed under Rosemount Viaduct and under Spa street and down round the back of the theatre, because we looked out from the keyhole of a manhole and saw trees: we were in between Union Terrace Gardens and the railway.

A little further on there was a bit where the roof of the tunnel was different.  Instead of red bricks, it was old stone masonry. It was the hump-back bridge that was in the picture on the library stairs. When they covered over the burn, they must have built the brick tunnel right up to the side of the bridge, left the bridge as it was, and carried on the tunnel from the other side of the bridge.

We didn’t go much further. The  water was getting deeper and moving faster and we didn’t fancy getting swept off our feet and into a cold wet grave somewhere near the harbour.

I went into the library recently to ask about the old pictures of the Denburn valley. They have a few pictures but not quite like I remember.  One is looking from the north towards Union Street, and it does show a wee stone bridge over the burn, but it looks more graceful than the bridge in  the tunnel, more of a sweeping curve than a hump-back.

Maybe there were two stone bridges? The library’s internet archive www.sivercityvault.org.uk has a few pictures, too.

The proposal to fill-in the gardens for another shopping centre may never come true if they can’t raise the necessary millions, or if there’s a  change of political power in the council. My proposal for improving the gardens is to exhume the Den Burn from its tunnel, and let the old stone  bridge see daylight again.

12 Responses to “Union Terrace Gardens From Underneath”