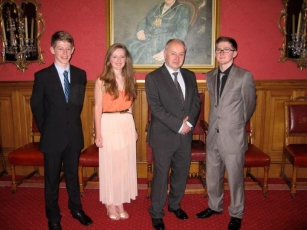 A campaign to back compulsory voting may be pushed by the Scottish Youth Parliament, if a motion, submitted by 17 year old NE member Chris Cromar, a Travel and Tourism student at Aberdeen College, is passed. It is set to be debated at this weekend’s sitting of the body which mirrors the Scottish Parliament.

“This will see a true democratic mandate for the government. It works in Australia and many other countries. It is people’s civic duty to vote, just as is paying taxes. Voting turnout will not be 20%, as seen in some wards in recent local elections.

“People will get more involved and feel part of society and will take more of an interest in politics, and local communities. It will become a way of life, benefit the country in the long term and show that stay-at-home voters will not be tolerated.”

Justin Rheiner is standing for election against two other MSYPs as convenor of the Equalities Committee. He is in charge of the Aberdeen Pride 2013 festival.

“Being the LGBT Officer for Aberdeen College has been an honour, supporting my fellow students from drop-in sessions to campaigns like Donation Not Discrimination, Equal Marriage and fighting for their equal rights.

“I’ve worked closely with organisations to help create a safer environment for my community, to help them fight discrimination as it is in any form unacceptable.

“But now I feel that it is time for me to progress, get out there helping the thousands of other youths that every day are being treated like they don’t belong in society whether due to age, race, religion/faith, disability, gender or sexuality. They matter the most as we are the next generation.

“Together we as a nation must fight against the prejudice that our youths unfortunately face today and I will do my utmost as Equalities Convenor to take action for our people.”

More information on Chris’s motion can be found at
http://www.syp.org.uk/members-motion-essential-info-compulsory-voting-W21page-336-