Aberdeen Voice’s Suzanne Kelly reports back from Willows on last Saturday’s Sandi Thom concert and with an update on Willow’s inhabitants. 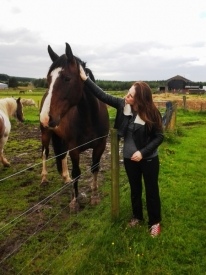 The weather changed every hour last Saturday, mostly from heavy rain to light rain – but that didn’t deter crowds of animal lovers from heading to Willows Animal Sanctuary to hear Sandi Thom.

Morgan, age 11, visited her favourites including Snowy the goat, and cats Fluffball, Fred and Frankie.

Fred likes to climb on people, and so too does Fluffball (as I later found out: having bent down to tie a shoelace, I became a perch).

The cats were in their finest form, all wanting lots of attention:Arthur,  the cat who had been found in waste ground living in a paint can; Ella, the three legged cat (Paul Rodger’s wife Cynthia is particularly fond of this sweet-tempered feline); Bailey (a fluffy Bailey’s Irish Cream coloured cat) and the rest.

Two new arrival cats were in cages awaiting trips to the vet.  Their owner had been caught in the act of dumping them at Willow’s entrance recently.  Willows staff and I discussed the alarming rate in people abandoning their animals and in particular the kittens left near Mrs Murray’s Home – in a box sealed with cling film. 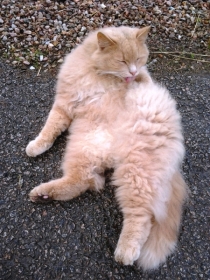 It was only a miracle they were found before they died from dehydration and suffocation.

What some people are thinking these days defies description.

We need places like Willows, New Arc and Mrs Murray’s to be sure – but we also need to make people aware that when they abandon animals, they are not only causing a great deal of suffering (emotionally physically) to a formerly-loved pet – they are breaking the law.

Thankfully there are also the kind of people who support Willows and other animal shelters, and today’s crowds were an amazing bunch of generous, animal-loving, caring people.

Sarah Norris told me she’d first come when she heard of Paul Rodger’s visit, and has been five times since.   Although she and her family live nearby, they were not aware that Willows welcomes visitors until then.

“the benefits of Animal Assisted Therapy should be publicised and much better funded.”

Many people of all ages have benefited from interacting with animals at Willows.  He continued:

“Paul Rodgers, Cynthia Rodgers and Sandi Thom have done very well to raise awareness – if not for them, we might not have visited.” 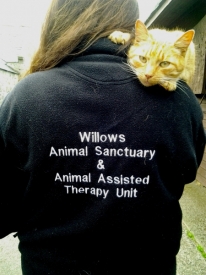 I knew Sandi Thom would be doing an acoustic set in a barn; I had not expected it to be literally packed to the rafters.

People were seated and standing, and a group of peacocks were on the barn’s beams.

The animals seemed to be listening in –  a black cat was seated quietly in one of the paying seats, watching and listening to Sandi intently.  Being there in this atmosphere was quite an experience.

Sandi later told me that she hadn’t done anything acoustic of this nature before, which surprised me as it had come off perfectly.  There were familiar hits of hers, covers, and material from a forthcoming album.

“I enjoyed myself; it was my first acoustic public performance, and it was a nice break for me.  Playing up close and personal like that reminded me of the meanings of the songs.”

She brought up the new patrons,

“I was glad I could invite Paul and Cynthia to be patrons; their kinship with animals is amazing and genuine.”

Sandi was soon off to tour all the other resident animals, and spent a good deal of time with the 18 hand gelding McGill which she’s adopted.   We were guided by Willows staff as well as several cats which followed us for more petting; they were greatly enjoying the attention.

Many of the cats here are unsuitable for family adoption for a variety of reasons; Willows was their last chance.  In fact many of the animals here were abandoned or confiscated, and  they would have been put to sleep by local authorities if not for finding a home here. 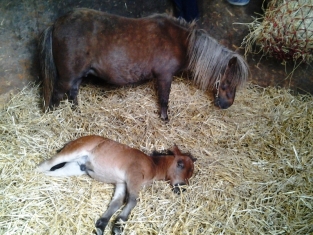 This is true of the newest arrival – a beautiful, tiny Shetland pony foal.  Its mare and two other Shetlands were abandoned and were due to be put down but Willows said they would take them.  So the pregnant mare has a new-born foal and a new life.

Clearly all of this takes a great deal of money – there are over 300 animals (‘all creatures great and small’ as Paul Rodgers put it on his last visit).  There is no government funding for any of our regional shelters – and they rely on our support.

Willows has several raffles on the go, animal adoption schemes, and a programme of upcoming events (details http://www.willowsanimals.com/ and on facebook via the ‘Help Save Willows Animal Sanctuary’ page.

I finally braved the reptile house – and was pleasantly surprised by a selection of beautiful reptiles and amphibians.  Many people had bought such pets thinking they would be easy to care for – most are not, and so they wind up at places like Willows (if they are lucky).  The Giubarelli family were enjoying these creatures and their visit.

Before it’s time to leave there is just time for another tour around the animals, then it’s time to say goodbye to Kate, Jenny and all the volunteers.  It’s been a brilliant day despite the weather, and everyone heads home happily, as the cats settle down for a rest, and the staff finally get a rest as well.  Until next time.