Willows Animal Sanctuary announced two new patrons – Paul Rodgers and his wife Cynthia Kereluk.  The couple were at Willows answering questions, visiting the animals, even playing a few acoustic bars of Bad Company Songs last week.  Would the voice behind Bad Company, Free and The Firm be at home on an Aberdeenshire farm?  Yes, and then some, as Aberdeen Voice’s Suzanne Kelly found out. 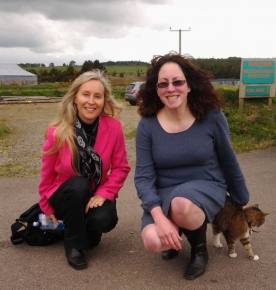 When I last spoke to Paul Rodgers it was for a split second while backstage when The Firm – Jimmy Page, Tony Franklin, Chris Slade and Paul Rodgers – were on tour in America, playing massive arenas and Madison Square Garden… I was a very lucky girl indeed.

When I saw him next, he was petting a cat at Willows, comparatively in the middle of nowhere.  Willows had just celebrated its twelfth anniversary, and in these troubled times is financially stretched.

The Rodgers’ have been supporting Willows and adopting animals there for some time, but what more could Paul and Cynthia do?   And how in the world did they find out about Willows to begin with?

Well, they had to be genuine animal lovers, there is no other way they’d wind up in this part of the world.  The press conference started and Paul launched straight into the subject:-

He jokes about finding Willows.

“I thought we were on our way to Sweden, and Cynthia persuaded me this was a shortcut.”

“We were on our way to Sweden where Paul was going to perform with Sandi Thom. She told us about Willows before, and we wanted to see it.”

“This past Christmas we decided to give our nieces and nephews sponsored animals as presents.  I think half of them are still wondering where their gift is.”

The couple sponsored a dozen or more animals for life last year around Christmas time, which was when I recall first seeing their names linked to Willows.

“We spoke with Jenny about fundraising. We wanted to help, and we’ve come up with a few ideas.  No one wants to see it shut.”

‘Two wounded creatures’ as Cynthia put it, had found each other and helped each other

The ideas they launched include an international raffle to celebrate the twelve years of Willows’ operations – the top prizes include an acoustic guitar played and signed by Paul, a painted tambourine, other autographed presents, and two mystery gifts.

There will also be an online charity shop (donations needed) and the plan is to raise Willow’s profile, particularly in Edinburgh and Glasgow.  Raffle tickets are on sale now, available online at http://www.willowsanimals.com/

“I have a huge respect… I am amazed that they take in horses, donkeys, stick insects– ‘all creatures great and small.’”

Cynthia then brought up the importance of Willows to people.  She retold one particular story -there are dozens – about the animal assisted therapy Willows offers, and how it has changed, if not saved lives.  The story concerns a young boy who was anorexic, a rare but increasing problem for young men, who was involved with Willows therapy.

One day he arrived unexpectedly, just after Willows had accepted a very badly treated horse.  This particular creature had a fractured pelvis, yet its owners were trying to ride it.  The horse became understandably more and more ‘of a diva’ and when it was sent to Willows, the fracture was discovered.  By then the horse had little time or trust for people.

The horse was still in an upset state, and was in a field on its own.  Willows staff could see the young boy was going up to the horse and they were quite concerned as the boy didn’t know the horse’s sad story or condition.  Well, somehow the horse and the boy got along famously from the first minute they met.

‘Two wounded creatures’ as Cynthia put it, had found each other and helped each other.  The horse improved, and so did the boy, who is now living a happy, stable life.

Cynthia has just been describing a cat they had, which had been hit by several cars in a horrible accident

The story of a little girl in a wheelchair was told; she was in a crowd visiting the sanctuary, and was having problems seeing what was going on.  A horse named Ninja put its head onto her lap and gently nuzzled her.  These may seem like little things to you and me, but for people who have problems, such little things can make an entire world of difference.  This is not sentiment, it is fact.

“There are over 300 animals here, and there’s a story for each one” Paul says, “and there’s a book in it.”  This thought gives me some ideas, we will see.

The Rodgers and Willows staff explain that the government does not give them grants any longer, due to the economic crisis and budget cuts.  They have had to be self-funding for the past year and a half.  Not exactly a great position when you are a last-chance sanctuary for so many unwanted wild, domestic and farm animals.

“The lives of animals are not something you can walk away from” Paul says, and that’s how I feel myself.

Before the press call got going, I had started to ask if the Rodgers had any pets.  I thought I misheard them, because I thought I heard ‘thirty-six cats’; (I put this down to my listening to too much loud music over the years).

“We had thirty-six cats at one point” Paul says – they were all rescued animals.

Cynthia has just been describing a cat they had, which had been hit by several cars in a horrible accident. This poor pet needed help with all of its needs, and it sounded to me like it wound up with the right people.  There is chez Rodgers, a Shepherd crossbreed which weighs 91 pounds, and currently they are down a mere eight cats. Somehow through all this it emerges that Cynthia is allergic to cats – my sympathies indeed, as I am too, despite having two rescue cats myself.

“We have had some interesting trips to Mexico” Rodgers says.

His experiences in Mexico are far from any rock star cliché – they go there and bring back abandoned cats.  They describe going back through US customs with several cats at a time, and because it is standard Food & Drug Administration procedure, they have to declare that the cats ‘are not for human consumption’.  Such are the workings of governments.

“All of our friends have two cats now – we meet them at the airport and they just take the cats then.”

The press call then takes a tour through Willows to visit the various animals, something I’d been greatly looking forward to doing again. I was on the lookout for some old favourites of mine.   Sandi Thom has adopted a giant, 18 hands high horse named McGill, who’s out in a pasture. We visit Arthur the cat, found living on waste ground in an empty paint can, the lovely three-legged Elly, and a host of other creatures, all warmly greeted by the Rodgers.

I ask Cynthia for a comment on what I see as being one of the biggest problems at present – people abandoning animals.  She has this to say:-

“People fall on hard times.  Reach out for help; don’t be embarrassed.  But you need to treat living things as you would like to be treated: pet ownership is a lifelong commitment.  There are those who will come behind and help.”

And on that note I leave her, tending to Arthur the cat that needs some medicine.   If you can come behind and help Willows, then please get in touch.

Coda:  Look out for Paul Rodgers performing with an orchestra works from his career.  Also look out for a Sandi Thom concert at Willows in July.
http://www.paulrodgers.com/news.html