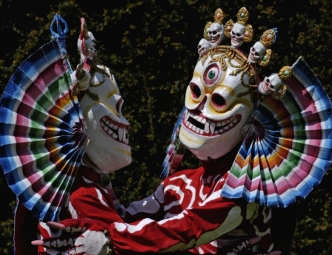 With thanks to Elizabeth Lindsey.

A group of Tibetan monks from the Tashi Lhunpo Monastery in South India, on an extensive UK and European tour, will be giving a performance at the Sanctuary, Queens Cross Church, on Monday 21st November. Their performances of masked dance and sacred chant have enthralled audiences from all over Europe.

‘The Power of Compassion’ offers a taste of Tibetan monastic culture with dramatic and colourful costumes, masks and musical instruments – including the great Dungchen or Long Horn, traditionally played from the roof of Tibetan monasteries.

The dances are interspersed with prayers and chants from the monastery using traditional instruments such as bone trumpets, drums and cymbals. The performance has been described as “A psychedelic whirl of chanting, dancing, drums, cymbals and processions” (The Times)

Tashi Lhunpo Monastery in Tibet was founded by the 1st Dalai Lama in 1447, and became one of the major centres of Buddhist learning with over 6,000 monks and students, and the seat of the Panchen Lama, second only in importance to the Dalai Lama.

Following the Chinese invasion of Tibet in 1949, and the 14th Dalai Lama’s escape into exile ten years later, it became impossible for the monks to have freedom to practise their religion inside Tibet. Consequently, several of the monks escaped into exile and re-established their monastery in 1972 in the large Tibetan refugee settlement of Bylakuppe, South India.

Now numbering around 300 monks, the monastery is once again regaining its reputation as a great centre of learning. It is internationally renowned for preserving the unique Tibetan culture and the tradition of masked dance and sacred music.

The UK and European tour in 2011 is organised by the Monastery’s UK charity. Proceeds from the tour are sent directly back to the monastery to support the monks in their day to day work, ministering to the spiritual and physical well-being of the local Tibetan community, and also to help with building projects as their numbers expand.

The performance at the Sanctuary, Queens Cross Church on 21 November will be at 7.30pm with tickets at the door: £8/£6 concession.