Recent visitors to the Winter Gardens in Duthie Park have been left badly disappointed after vandalism caused the closure of some important sections including the Arid Room where Spike the Talking Cactus is on show. The new ‘Voice of Spike’ Andy Gibson reports on a worrying turn of events at the park. 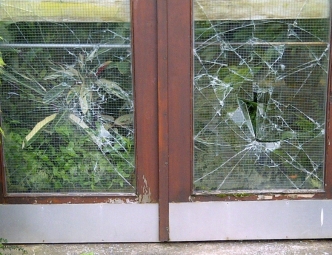 I recently succeeded in my campaign to reinstate our favourite talking plant known as Spike The Cactus at the David Welch Winter Gardens in Duthie Park.
I was also given the honour and privilege of providing a voice for the prickly fellow for the first time in approximately 13 years. Duthie Park recently gained a grant from the Lottery Heritage Fund to restore the grounds to their original glory.

This included getting Spike repaired with help from a really nice man called Richard Irvin and his friends.

There have been previous attempts by vandals to smash the windows of the Arid Room and this time, sadly, the vandals succeeded.

Inside, the Arid Room itself is covered in broken glass which has forced the Friends of Duthie Park, in the interest of public safety, to close that area and other damaged sections throughout the Winter Gardens.

This has of course been of great inconvenience to the Staff at the Winter Gardens  including myself, and more importantly the public.

I created and uploaded a video to hosting site YouTube regarding this issue. In the comments box I have read that someone’s father in law, a keen gardener, came here to visit from Derby in England. This gentleman could not see the true David Welch Winter Gardens in all its glory. 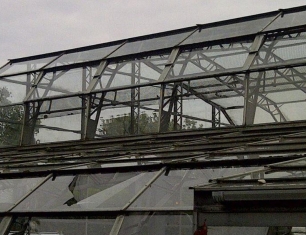 This is a shame because there is not much else in Aberdeen that provides such an extensive view on various gardening styles. Seeing the full Winter Gardens as we know and love it would have been a great experience for a visitor who has an interest at what Duthie Park can offer.

As I documented above,  Duthie Park was given a large sum of money from the Heritage Lottery to refurbish the grounds including the restoration of the ponds in the hope of attracting wild ducks to return to the spot. Some of this will now need to be set aside to cover the cost of repairs.

I am very keen and raring to go as far as operating Spike is concerned; I loved entertaining the public last month during the Open Day, and I was looking forward to returning soon.

However, now everything has been put on hold until the mess has been cleared away, the repair work completed, and the Health and Safety aspects addressed.

I have spoken with the manager of the Winter Gardens and he has informed me that there have been no further attacks. Whether this represents and end to such idiotic behaviour, we’ll find out over the forthcoming weeks. I do hope he/she/they are caught before they cause any more destruction elsewhere.

If you have any suspicions regarding who may be responsible for this damage, then please contact Grampian Police on 08456005700 or if you want to remain anonymous you can communicate with Crimestoppers completely free on 0800555111.

Further Info – Click on the links.
Friends Of Duthie Park
The David Welch Winter Gardens
Spike The Cactus’ Facebook page
Andy Gibson’s YouTube Video
The kind man and his pals who operated on Spike to give him a new lease of life