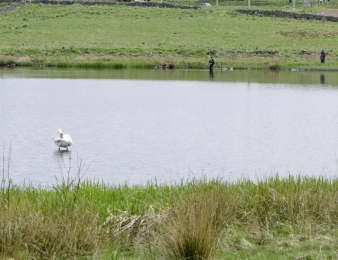 Aberdeen Voice’s photographer and IT technical master (otherwise known as Rob) and I paid a visit this past Easter Sunday to Loirston Loch.

It was a quiet afternoon; there were only a few anglers and a handful of walkers.  Most people were probably at home with families for the Easter Holiday, and Rob and I took full advantage of the lack of people to explore the area. 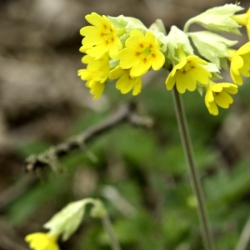 It was too early in the season for many flowers to be out, but we saw some very delicate wildflowers, some bluebells about to blossom, and some primrose.

There were several swans on the loch, which was still but for the occasional movement of those fishing. You could easily forget that Union Square was up the road.

Unfortunately, I couldn’t forget that a giant stadium will forever ruin this tranquillity. 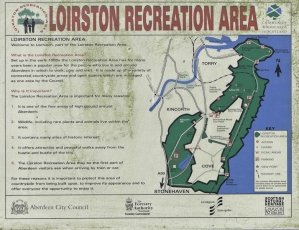 One of the first sights that met our eyes was the now-famous welcome sign.

The sign was erected by the City Council and tells Loirston’s visitors why the land should not be built on.
I was almost surprised the Council had not removed it. (I had written a letter that was printed in the Scotsman, when I first heard the area was earmarked for Aberdeen Football Club’s new home; this was in May 2009). 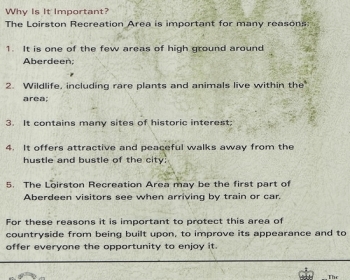 It is still inconceivable that anyone could possibly consider destroying this nature sanctuary.

Supposedly Loirston is in an SAC.  Plunking a 21,000-seat stadium down, which will ‘glow red in the dark’ with 1400 parking spaces will fragment the greenbelt.  Building a giant structure in the fields near the loch will take valuable hunting, living and breeding area away from the wildlife.  This is being euphemistically billed by stadium supporters as ‘creating a wildlife corridor.’

Rob spotted a Heron overhead; it was majestic.  On my previous visit I saw a buzzard in flight.  Will these and other creatures return when there are football crowds next door? 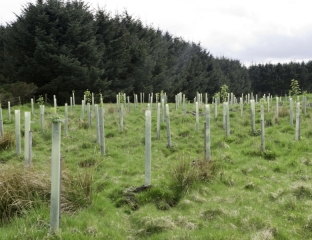 We noted the use of tree guards – an option apparently not suitable for the planned tree plantation up the road at Tullos Hill.

Rob and I looked around the perimeter of the area and near the Lochinch Farm Interpretation Centre.  The City is great at making sweeping statements about biodiversity and reducing CO2 emissions – how precisely this squares with the planned stadium is another matter. 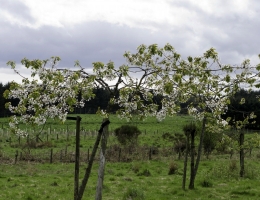 I recalled the public hearing on the Stadium plan; Nigg Community Council was an objector, and had been left out of relevant consultations.

The Tullos Hill deer cull has likewise not properly consulted with Torry Community Council, and like the Loirston Loch situation – the public’s opinion seems to have no weight whatsoever with our elected officials. 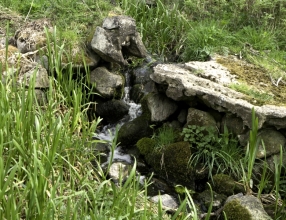 It’s likely Stewart Milne and the proponents of the stadium feel that the stadium is a done deal.  They will find that this is certainly not the case.

Planning permission has been granted, and the Scottish Parliament did not call in the plan.  This is not the same as having the stadium built.
There are several communities and community councils opposing the stadium.

If you can find the time, do go visit Loirston.  If after your visit you have feelings one way or another about building the stadium, its offices and parking, etc. in the area, please do tell your elected representative.  It’s not too late to do something.

More from me on Loirston in the near future.