Chris Gough, of Kennoway in Fife was moved to comment on the recent Aberdeen Voice article about the proposed deer cull on Tullos Hill and the revelation that the cull had been planned in advance of the public consultation regarding Phase 2 of the ‘Tree for every citizen scheme’. 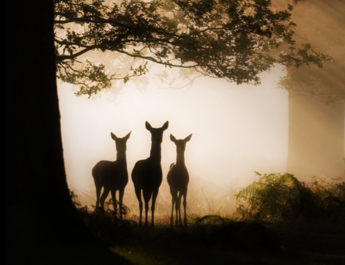 What an excellently presented article by Suzanne Kelly. She has hit the nail on the head so many times and it has sad echoes of our fight to save the deer at the Diageo plant in Fife a year ago.

These deer had been part of the local wildlife scene for more than twenty years and were loved equally by the general public and the staff at the Diageo plant.

Indeed they were fed by members of the staff of DCL (an earlier occupier of the site) for many years and the company had a vet carry out visual checks on the condition of the deer. Photographs of the deer were even displayed on the boardroom wall.

All this came to nothing when the present company, Diageo, decided to extend their plant. The Deer Commission for Scotland ( DCS) was consulted and came up with the “only humane solution” of a cull to remove the deer that had now become an embarrassment.

Untruths about the health and condition of the deer were published through the local media to justify the decision for a cull on “animal welfare” grounds. Advice and assertions that there were alternatives to a cull were rejected, so sadly our beloved Diageo deer were not saved in spite of valiant efforts by so many agencies.

At least the Tullos deer are still with us and so they should remain. The SNH hide their true colours behind their name- Scottish Natural Heritage – which implies to the general public that they CARE for all things natural when in truth they are in league (indeed they are now merged under one flag) with the Deer Commission for Scotland.

They in turn are in league with the land owners who want their land “managed” to suit their own purposes e.g. grouse moors, deer forests etc.

The SNH seem obsessed with the idea that there are far too many deer in Scotland and that for their own good they must be culled. As someone who has holidayed in rural Highland Scotland for the past 35 years I ask one question – Where are all the deer?

I regard myself as lucky and privileged if I see more than half a dozen wild deer – Red or Roe in a summer.

The SNH would have us believe that every rural community is over run by deer and heaven forbid they are now invading city centre parks as well.

The very fact that they use behind closed door meetings to discuss their strategies is an indication of how aware they must be that their actions are at odds with the public’s perception of what should be happening. Aberdeen City Council clearly must also be aware of this in their complicity. ACC are now going to take the line that they have taken advice from the ‘experts’ and have made their decisions on the basis of this information.

The easiest, although not an ecologically sound solution, is without doubt a deer cull but this will not be a “one off”, but a repeated exercise over the next three to five years to allow the trees to become established. I also concede that deer are determined creatures of habit and will not be easily kept out of what has become a customary feeding ground. Roe deer are particularly good at lifting fences to gain access, so fencing the area is probably not a viable option. Unless the cull could then be justified on the grounds that the deer are causing damage to the fencing as well as eating the trees!

The truth of the matter is that the deer should be left to come and go and the trees protected with biodegradable tubing as happens in many places around us in Fife.

Biodegradable means no litter problem. The tubes just disintegrate and disappear. As for the damage by vandalism I think this is a very large red herring.

In my experience  vandals have much more entertaining targets than some trees planted on a hillside in Aberdeenshire.

As long as the Tullos Deer are alive there is hope. The one point which ACC would take well to note is the irreparable damage the destruction of these deer will cause to their (apparently) already tarnished reputation.

The public will not easily forget – just ask Diageo!
The world is watching.