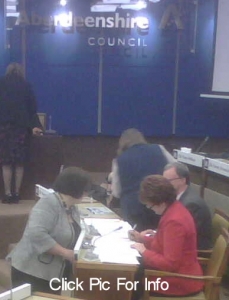 I said last week I did not expect Aberdeenshire Council’s budget setting meeting, which took place yesterday (10 February), to be either lengthy or out of the ordinary (see: Aberdeenshire Budget Day Looms, Aberdeen Voice 4 February 2011).

I was only half right. The meeting lasted less than two hours.

Normally, budget meetings are extremely predictable. The Council’s ruling administration proposes its budget. The opposition parties each propose an alternative package of measures.

There is a debate in which speakers from each party say why they believe what their party has put forward should be supported. There is a vote in which each party votes for its own set of proposals. The administration’s budget receives the most votes and thus becomes the Council’s budget.

Yesterday’s budget meeting was different in one key respect. The Democratic Independent group of councillors, of which I am a member, was not allowed to put forward its alternative to the administration’s budget.

As reported in previous articles, Aberdeenshire Council’s Liberal Democrat/Conservative administration, with SNP support, voted through nearly £27 million of cuts and savings at the full council meeting on 25 November.

At yesterday’s budget meeting, further savings of £1.461 million had to be approved to balance the Council’s revenue budget for 2011/12. As expected, the Liberal Democrat/Conservative administration accepted the recommendation from Council officers to close the budget gap by bringing forward planned cuts and savings from 2012/13 into 2011/12.

So, for example, the administration proposed changing the cut in spending on Community School Networks it had decided in November, increasing it from £107,000 to £137,000 in 2011/12 by bringing forward some of the cut planned for 2012/13.

Council officers advised that it was not competent to propose no cut to these staff, even though we had put forward an alternative

Amongst the accelerated cuts in education spending proposed by the administration was an increase in the cut for 2011/12 to spending on primary school classroom assistants, from £88,000 to £100,000.

In their budget proposals, the SNP councillors left unchanged the planned £88,000 cut in the 2011/12 budget for primary school classroom assistants.

This year it fell to me to formally move the Democratic Independent group’s budget proposals. We saw it as a priority to maintain spending on primary school classroom assistants and visiting specialist teachers – so we proposed making no cut to either in 2011/12. We proposed making a saving instead by cutting the budget allocated to repairing unadopted roads, as these roads are not, by definition, a Council responsibility and the budget for repairing them has mostly not been spent.

Once it became clear I was proposing no cut to primary school classroom assistants or visiting specialists, I was stopped from speaking by the provost. Council officers advised that it was not competent to propose no cut to these staff, even though we had put forward an alternative way of balancing the budget.

The Council operates a general policy that it cannot reconsider its decisions within six months, unless there is a two-thirds majority in favour of doing so. But when the administration, and then the SNP councillors, proposed increased spending cuts in 2011/12, by bringing forward cuts from 2012/13, it was ruled this did not constitute a change to a previous decision, so the two-thirds rule did not apply.

But when I proposed the opposite, not to proceed with cuts, this was deemed a change that could only be debated if a two-thirds majority agreed.

A show of hands was called by the provost. Just six councillors voted to allow us to put forward our budget proposals.

The provost ruled the Democratic Independent group budget proposals out of order.

Faced with a debate between the administration’s and the SNP’s very similar budget proposals, both of which opted for staff cuts in primary schools, there was no point in staying. None of the Democratic Independent group councillors was going to vote for either of the proposals we had to choose from. We all walked out in protest.

I have never walked out of a Council meeting before. It is not something I would normally consider and not something to do without very good reason.

I did it yesterday because the budget debate had become pointless, and because of the manifestly unfair way the meeting was being conducted. It was not that our proposals were voted down – it was that we were not even allowed to put them forward for consideration and debate. That is undemocratic and wrong.

I am appalled at the Council’s refusal to allow open debate. Apparently it is perfectly acceptable to propose further cuts in classroom assistants – but seeking to stop the cuts is not allowed.

That is completely one-sided.

The two budget proposals that were voted on by Aberdeenshire councillors yesterday both accepted the primary school staff cuts the Democratic Independent group had sought to avert.

It was, of course, the administration’s budget proposals that were approved. The cuts to classroom assistants and visiting specialist teachers – and many others – will go ahead.