The Aberdeen launch of the “Yes to Fairer Votes” campaign took place on Monday 31st January. This is the Yes campaign in favour of the Alternative Vote Referendum on the 5th May. 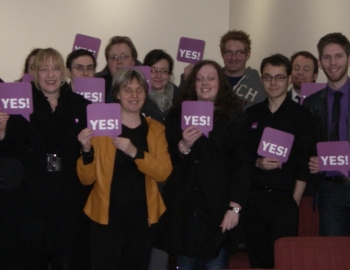 The launch meeting was held in the Kings Street Art Centre.  It started at six and typically I was late after heading straight from work in Dyce and sitting for three quarters of an hour in the usual rush hour traffic.

Still, it was a decent turnout given that it was a dark, rainy, Monday night in January in Aberdeen!

I found my seat and picked up the bright purple speech bubble with their ‘YES’ campaign slogan.
In attendance was roughly twelve to fifteen people, comprising of students, a couple of well known independent Aberdeenshire councillors and a mix of assorted interested others – myself included.

The Alternative Vote (AV) is very much like First Past The Post (FPTP). It is used to elect representatives for single-member constituencies, except that rather than simply marking your choice on the ballot paper with a single ‘X’ , you, the voter will have the chance to rank the candidates on offer.

The voter marks a ‘1’  beside their first-preference candidate, and continue onward, should they so wish, to put a ‘2’ by their second-preference, and so on, until there are no more candidates or they do not want to rank any more candidates. A candidate is elected if they receive a majority of first-preference votes i.e. more people put them as number one than all the rest combined. If no candidate has a majority on first votes, then the second-preference votes of the candidate who finished last on the first count are redistributed. This process is repeated until one candidate gets over 50 per cent to win the seat.

The two presenters; Neil and Kristian were sitting at the front with an overhead display and proceeded to inform us what it was all about, how the campaign had progressed so far and their campaign plans for Aberdeen and Shire. They told us they now have an office at 35 Union Street as their Aberdeen headquarters from which they will execute their campaign, including the use of volunteer telephone canvassers to generate votes.

Their main reason for the meeting seems to have been in order to gather ideas from the audience on new ways of getting the message across and recruiting willing volunteers between now and the referendum to man the phones and spread the word. We were advised about various events ranging from University hustings, book and jumble sales to street stalls and press articles.

They also took the opportunity to advise us of the NO campaign headed by Margaret Beckett MP, whose slogan they summarised as nothing more than “If You Don’t Know say NO ” This appeared to me to exploit people’s ignorance.

They informed us that the “No” camp  had been challenged to present an argument as to why ‘FPTP’ is a better system, but all they appear to have offered is why not to vote ‘AV’.

Personally, I am all for proportional representation and I had already joined up to the Yes to Fairer Votes campaign on Facebook without looking at it too closely. I knew, vaguely, it was about replacing the traditional Westminster voting system with ‘AV’, but frankly I was not entirely impressed with ‘AV’ initially. It just did not seem very proportional to me. Perhaps we can’t change things too quickly in the rest of Britain. 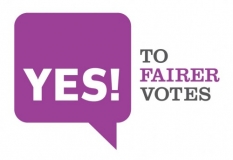 So it seems that perhaps ‘AV’ is the first step in a natural progression to a fairer system. At least with ‘AV’ each elected representative has the majority of the votes and everybody who voted has had a chance to rate them. This means the MPs need to work harder for us to get these rated votes and can’t just rest on their laurels or in some cases do just enough for what we pay them.

This is just the start of the campaign here in the Northeast but it is surprising how many of my friends, family and work colleagues have no idea that there is to be a referendum, nor what ‘FPTP’ or ‘AV’ actually stands for. It is often difficult to persuade people it is their right and duty to vote in a general election, which at the very least gives them a mechanism to deselect poorly performing representatives. In any event, I offered to help with the campaign, offered some ideas, agreed to put up a poster on the side of my house and will cross my fingers that the populace will take an active and positive role in the referendum.

For further info on Yes to Fairer Votes and to find out what is happening near you – Click Here.

The next event is a Street Stall 5th Feb, at midday St Nicholas Square, Aberdeen