‘One option is that when council cemeteries are full, to stop maintenance and turn them into wildlife areas.’ 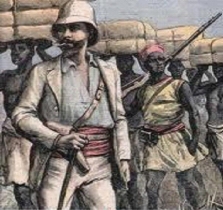 That night we made camp in a small clearing. While the native bearers busied themselves with tents and cooking-fires, their headman, D’oad, explained that tomorrow we would be leaving the territory with which he was familiar – D’uthiepark and entering the almost unknown lands of Allenvale or the ‘Boneyaird’ as D’oad called it.

Here it was that my cousin had disappeared while searching for the tomb of his great-great grandmother, Mary McWalters. Family legend, backed by an ancient scrap of a map, placed her grave – plot 376 – in the heart of this wilderness and, inflamed by his obsession with genealogy, cousin Walter had plunged headlong into this savage, untamed heart of darkness to further expand our family tree. His last message had said that he was about to enter ‘the wild lands’ and hoped to return within a few weeks at most. That had been five years ago.

Dispatched by the family to discover what had happened to him, I had followed in his footsteps, paddling down the mighty D’ee, hiring bearers and D’oad, a locally famous hunter who had agreed to be my guide. Thanks to our family’s business interests in the much richer land of Trumpistan to the north, I was well supplied with ‘gowfbaws’ and ‘tees’ which were highly valued here. Indeed a bride could be had for two or three ‘gowfbaws’ and I had promised a brace to each bearer who stayed the course. Strangely, D’oad had refused these rewards and intimated that he had a purpose of his own in making this dangerous trek into the unknown.

D’oad poked a grimy, heavily-tattooed finger at a spot on a copy of my cousin’s map.

“We’re aboot here, G’adgie.” he said, respectfully. I pointed to the north-east towards where I thought Mary McWalters grave might lie.

“Tomorrow we’ll head towards this place.” I told him. D’oad turned a whiter shade of pale.

Trusting to our campfires to deter the countless ferocious wild animals hereabouts, D’oad and I joined the bearers for a meal of ‘minsantattys’ and some locally-grown ‘fitepuddin’ – a welcome break from the unleavened flatbread called ‘R’owie’ which the natives chewed unceasingly and which, though almost inedible, could sustain a man for a whole day’s march.

As we ate I considered my situation. The virtually impenetrable wilderness surrounding us had once, according to history and local legend, been a tamed, civilised land. Then had come the ‘Hard Times’. Tribal elders told of chaos, neglect and destruction – wasteful, foolish gods – K’ooncil, D’een, Ah’Kseff – who arose and laid waste to the land.

Civilisation had retreated, well-groomed parks returned to the wild and, aided by global warming, once-exotic plants safely confined within D’uthiepark had escaped and colonised vast tracts of land including the now dreaded ‘boneyairds’.

Still musing, I retired for the night hoping for a good night’s sleep before we set out in the morning.