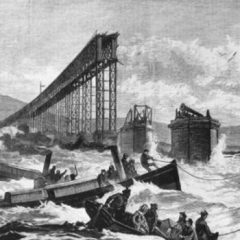 On the evening of Sunday the 28th of December 1878 the Edinburgh train, approaching Dundee on Sir Thomas Bouch’s new bridge was plunged into the icy waters of the River Tay when the whole section of the bridge nearest the city collapsed in the high winds.

Seventy five passengers and rail crew drowned in the resultant crash which shocked the entire nation and raised some extremely cogent questions about the design, engineering and fabrication of the bridge. Sir Thomas Bouch, who at the time of the disaster was, rather worryingly, designing another bridge, to cross the River Forth, came very badly out of the subsequent enquiry and died shortly afterwards, a broken man.

Obviously, disasters of these magnitude generate a certain amount of urban myths and an ongoing one in Dundee was that Karl Marx and Friedrich Engels had tickets for the doomed train but for some reason didn’t go. It is a possibility as Marx (convalescing after an illness) and his daughter Eleanor were believed to have spent at least part of the year in Scotland around this time.

So, if this isn’t just an urban myth from Bonnie Dundee then why did Karl and Fred not get the train?

Oh! ill-fated Communist, dead in the Tay,
I must now conclude my lay
By telling the world fearlessly without the least dismay,
That your principles of collectivism and the abolition of private ownership would not have given way,
At least many sensible men do say,
Had they been supported on each side by the lumpenproletariat,
At least many sensible men say that:
For the stronger we our politics do build,
The less chance we have of being killed.

PS For any hapless souls out there thinking of travelling to Easter Road or Tynie by rail in future to watch Our Brave Boys getting bent over the kitchen table and given a hearty dry rogering, I would remind you that many of the girders from the old bridge were used in the construction of the present one. Still fancy it?