In these post credit crunch-times, with predicted belt-tightening likely to bring tears to a glass eye, I wonder whether there might be resurgence of the cheap funerals (known in the patois of the north-east of Scotland as ‘froonyals’) of my youth.  A good illustration would be the froonyal of my uncle Chunty in 1968: 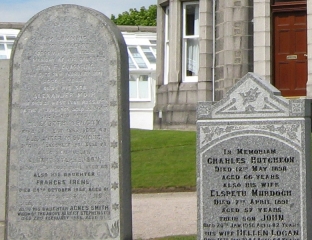 Chunty’s family huddle together in the front pew. This is due more to a failure of the chapel radiators than anything related to a group hug. The pews behind the immediate family creak under the combined weight of people to whom Chunty is related through drink. The organist battles his way through a double time version of ‘Abide With Me’.

This has been written specially for low cost funerals by the Reverend Melrose Nochty himself.

Melrose strides in to the chapel and ascends to the pulpit two steps at a time. At the summit, he signals the organist, Mr Leiper, to pack it in—sharpish like, by throwing a hymn book at his head. Melrose starts talking before the final strangled blasts of air struggle out of the organ pipes.

‘Up ye get,’ he says, and lifts his palms toward the rafters. The congregation scramble to their feet.  ‘Dearly beloved, et cetera, et cetera, and et cetera … Matthew, Mark, Luke and John … pearls before swine … Sit doon.’

He fishes an alarm clock out of the dark recesses of his ministerial garments, winds it up, and slams it down on the edge of the pulpit. The congregation sit down.

Melrose is talking faster than an auctioneer at a cattle station in Woolawonga. “Stand up! The Lord may well be my Shepherd, but let’s face it”, he waves a hand toward a plywood casket , “judging by Chunty’s pitiful record of church attendance, it’ll be easier for the Turra Coo to pass through the centre o’ a doughring than for Chunty tae enter the Kindom o’ Heaven.

From his lofty perch Melrose looks down at the organist’s toupee.

‘Mr Leiper will now play an ex-tremely short extract from the twenty-third Psalm.’ Mr Leiper’s fingers scurry over the keys like mice fleeing a burning barn. Eight bars in, Melrose again signals Mr Leiper to cease and desist, this time by repeatedly banging a hymn book on the edge of the pulpit and shouting ‘All right, that’ll do, this isn’t an organ recital, Mr Leiper.’

Melrose clasps his hands before him and closes his eyes. “Jonah in the belly of the whale…Sermon on the mount… Feeding o the twa thoosan”—’ a voice from the back of the chapel, interrupts.

A thundercloud of Old Testament wrath passes across the Reverend Nochty’s scowling face. He speaks. “Listen pal, you shouldnae’ even be here. Now sit doon.”

“Well, stand up and then sit doon.”

He pauses, grips the edges of the lectern and looks at the congregation with a measure of contempt normally reserved for the criminally insane. His voice drops an octave. “There’ll be weepin”,’ he says “and there’ll be a fair skelp o wailin’ intae the bargain.” He stabs a finger in the vague direction of the front pews. “An’ by Christ, teeth’ll be gnashed ‘n’ aa! Stand up, sit doon, and pey attention”.

Now it is the widow’s turn to interrupt.  “Will ye be much langer?’ she asks. ‘Only, there’s a steen’ cold cert rinnin’ in the three thirty at Perth and the nearest bookie’s fower miles awa.”

Melrose gives her the vees and gathers from the alarm clock that it is time to wind up the service. “Get up and start prayin, real fast”, he says. He lowers his head fast enough to get whiplash. “Oh Lord, please tak’ Chunty tae yer bosom. In yer own hivvenly time, of course, but seener rather than later, if ye dinna mind. I’ve anither three o these to get through afore lowsin’ time.”

He raises his arms and clears his throat. “Ashes tae ashes, stew tae stew, Chunty’s awa, and so are you”, Melrose’s alarm clock goes off, forcing him to raise his voice. ‘Sit doon, stand up, and shove right off.” The congregation do not have to be told twice; there is a stampede through the chapel doors reminiscent of the opening thirty seconds of a Next sale.