Voice’s David Innes, a sometime bastard in the black, looks at this week’s threatened strike by SPL referees after weeks of controversy. 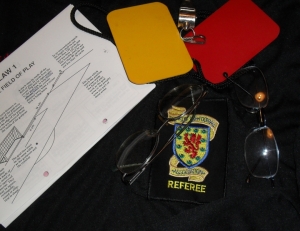 When Willie Collum sent Rory McArdle off at Pittodrie last week, I joined with the rest of the fair-minded, judicious and sagely punters of Section Y in ranting foul-mouthedly about the ref’s dubious lineage, his resemblance to both male and female external reproductive organs and the fact that were he ever to join the Mile High Club, it would be a solo flight.

I was not the worst, but I held my own. Just as we were accusing him of doing, I suppose. That’s where it ended though. No matter what resentment I felt at Collum’s performance, it’s over, it’s in the past and I’m now more concerned about where we’ll be in the table come the festive season.
I think that’s the way most fans take these things. We rage when things go against us but suffer memory blanks for decisions which have gone in our favour. We rant, we rave, we slaver and gnash our teeth, but accept it stoically as part of the game. And we should not forget that it IS just a game.

I cannot understand what goes on in the minds of supporters who insist on taking these things further, to the extent of threatening referees, their homes and property and their families. What sort of empty lives must such individuals and mobs lead to make them behave in such a way? I’m as fanatical as the next fan about my team, I love to see them winning – and it will happen again, believe – and can take defeat badly especially against certain teams.

Of course, I have long held the opinion that those who wish to associate themselves with the alien and discriminatory cultures at certain successful clubs, having no local or cultural affinity with those clubs have something missing from their lives anyway, but that is another debate.

Referees are now threatening to strike because they feel their integrity has been called into question. Dougie McDonald has admitted lying and should resign. That would not be the end of the matter, I’m sure, despite what some influential people claim. Before long, some other poor sap in black would be accused of being part of the conspiracy against whoever feels slighted and who cannot accept that some days you’re the doo and on others, you’re the statue.

Do I support the strike? Yes, and not just because of the high profile issue currently exciting Jimmy Inarticulate, first-time caller by the way Jim, and readers of the Daily Paps.

In years gone by, as a fitba coach asked to referee games every week, I thought I’d better do the knowledge and make sure that every time I blew the Acme Thunderer that I knew what the hell I was deciding. I went over to the Dark Side, turned from poacher to gamie, took the king’s shilling and became a bastard in the black. It was great fun. I learned a lot. I found out that playground-ingrained received wisdom was, well, not really wise at all.

I didn’t last too long doing it as a favour to kids’ teams though. Being called a wanker by 10-year olds quickly loses its precocious charm. Dealing with boorish coaches who believed they were Alex Ferguson and who seemed intent on acting out their own fitba fantasies by instructing bairns to kick and maim other bairns saddened me. Doing the right thing by talking to players, telling ‘keepers, “Aye, it’s OK to pick it up, it wisna a pass back” or taking 5 minutes at half time to instruct a constantly-infringing team on the correct way to take a throw-in but being abused by grown men on the sidelines for so doing wasn’t an ideal way to spend a sleety Sunday morning at Aulton.

Watching 9 year olds dive outrageously to try to win penalties (not on MY watch, sonny) and adopt other “professional” insidiousness they had seen on Murdoch TV disillusioned me. It did the same to many of my peers who began with less cynicism than I had. We just became “unavailable” when asked. The message got through quickly enough and the calls stopped.

It begins at that level. It reaches its pathetic zenith at professional level. Someone’s going to get hurt and by then it will be too late for recriminations and hand-wringing.

Have your strike, comrades. It’s unlikely that I’ll be at an SPL game this week, but I’d happily join in the “scab” chants at the shoehorned-in replacements who will be adding to the problem rather than help solve it.