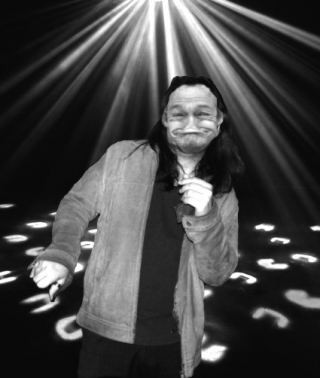 As a very mature student of the Open University my first encounter with an OU disco was a stark reminder that although youth is wasted on the young, only they have the energy to give it a good airing.

The night started well enough. Anita and Liz were on their third flagon of Pimms Number One by the time I arrived. I was just wondering how far out I should push the boat — would I start with a small Cinzano and work myself up to a pre-bed cocoa around ten or cast caution to the wind and line up thirty quid’s worth of randomly selected shots and let rip?. I was intoxicated by the choice.

Anyway, I must have gone down the ‘Let ‘em Rip’ route because less than an hour later I found myself asking Caroline to marry me by shouting in her ear during a 90 decibel rendering of some nonsense by Justin Trouser-Snake.  She declined of course but she will have to live with that decision for decades after I’ve been fitted with the wooden boiler-suit and chucked into a hole in the ground back in my home village.

To alleviate the pain of Caroline’s refusal I concentrated on Katie and tried to work out where on Earth she was getting her energy from.  She was dancing as if she’d just got out of Pankhurst prison on remand and the wanton abandon with which she now thrashed her arms about was a condition of her bail.  Had she somehow managed to access an energy source known only to the ancients? Was she in possession of a rogue batch of ultra-concentrated Lucozade Sport?

I ran out of hypotheses to explain Katie’s adrenalin levels around the same time I ran out of steam and it was time to go before I asked Caroline to marry me again, just in case she hadn’t understood the question the first time around. I slipped away quietly, as I tend to do on these occasions, knocking over a table of drinks and falling downstairs on my way out.

Sadly, the night came too suddenly to a close. I had waited faithfully for the Disk Johnny, or whatever they call those fellows who crank the handle on the radiogramme at social functions nowadays, to play a long playing record I recognised. When finally he laid hands on ‘Can’t Touch This’ at a quarter to two in the morning, I ran all the way back to my chalet and dug out my special edition MC Hammer dancing trousers. But by the time I got back the dance hall was as empty as a church on a Saturday night.  I skulked back to my chalet and fell into bed. But not before I spent an hour or so trying to take my MC Hammer trousers off over my head.  In Scottish culture, this is a sure sign of a great night out.