It would appear that once again Aberdeen City Council is wasting a significant amount of tax payers money  introducing ‘CONTROLLED PARKING ZONES’ in quiet residential streets around Old Aberdeen, many of which have no parking problems whatsoever. 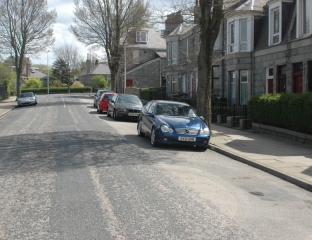 Under the plan residents will have to pay up to £120 per vehicle per annum for the privilege of parking in their own street. The Council, however, rejected the claim that this is a money-making scheme, stating that it will indeed be a costly commitment in the long term with the associated expenditure on parking meters, road markings, maintenance, and so on.

In effect admitting that it will be a further drain on scarce resources for years to come.

So, why is the Council introducing this scheme which no-one in the area seems to want? EVERY single written objection by residents has been systematically rejected. (See *2)

The University is building a new library on its existing car park and is funding the implementation of the new controlled parking area, affecting many of the surrounding residential streets, to the tune of £600,000. ( See *1) This action is to ‘compensate’ for its failure to provide adequate parking on its own land.

Could it be that the Uni figured that our cash strapped Council would jump at the offer of a short-term pay-off, and that this would be cheaper than incorporating an underground car park in the design of the building?

Also, should the situation get worse in years to come, that would then be the Council’s and the local residents’ problem. They’re not daft, these University chaps!

The residential streets around the University – such as the one pictured here DURING the University term – are QUIET during the day, because many residents drive to work, leaving plenty of capacity for daytime on-street parking. During the evening, however, the streets become busier with parked cars as naturally, that’s when local residents return from work. Most residents will have no option other than to purchase a parking permit, yet still may not have any guaranteed parking spaces at the very times of day they need them. 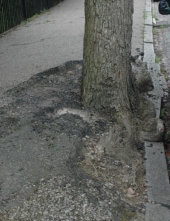 Now let us turn our attention to the streets themselves, there are several potholes, the pavements are made unsightly and dangerous with overgrown tree roots. Some of the surrounding streets have been need of repair work for some time.

There is a strong case for the introduction of speed bumps on our street. Many vehicles drive at dangerously excessive speeds near the entrance to the childrens’ play park on Sunnyside Road, despite the street being in a 20mph zone. A serious – potentially fatal – accident is waiting to happen here.

So, is the Council making plans to introduce traffic calming measures and warning signs? No. It is simply pressing on with its plans to erect parking meters, parking restriction signs, road markings etc., none of which will make our streets safer, and none of which is wanted by local residents.

The library building is now well under way. The Uni’s parking capacity, therefore, has long since been reduced.

Yet, with the new term started, there is no evidence of any increase in demand for parking in the new CPZ streets in our area around the Uni nor any evidence of the congestion or disruption predicted by the Council.